From Star Trek to Todays Tech 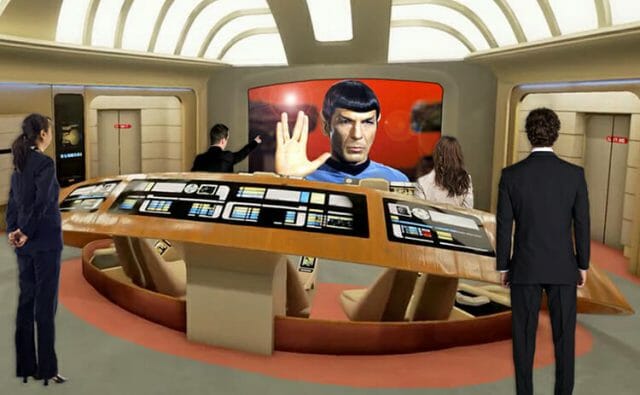 Star Trek is one of THE MOST iconic franchises of the Sci-Fi genre to ever consistently excite the zeitgeist over the span of several decades. From the kitschy TV show of the 1960s, to “The Next Generation” series, to feature films, to the current “Star Trek Discovery” TV show – Star Trek has remained in the forefront of American pop culture for almost 60 years.

It has often been said that the Star Trek phenom was uncanny in its ability to predict the technology of the future. So, how many of those wonderful Trekkie-Techie devices born from the uber-creative mind of original Star Trek series creator Gene Rodenberry, are around in 2019? Let’s explore…

Ambient Microphones:  Did you ever see Captain Kirk lean-in to a microphone to give an order? Not a chance! He just spoke them out-loud, & whoever needed to hear him got the message. This is very much the same type of technology as ceiling array microphones used by today’s AV industry, that fulfill current video conferencing requirements. Audio products from Shure & Biamp are truly modern tools that would even impress Captain Kirk. (shure.com & biamp.com)

The Bridge Viewscreen:  The large, wide screen located on the bridge, was used to view images of the “outside world” & fellow space-travelers. It obviously took a talented AV integration team like CAPTUS SYSTEMS to design & build the Audio-Visual set-ups used on any of Starfleet’s bridges! Much like the video display monitors of today, the Viewscreen had an aspect ratio of 16:9 – which was nothing like the 4:3 ratio of 1960’s TV sets. Captain Kirk & his crew would have been dazzled by the clarity & brilliance of any of today’s large-format displays & enormous video walls. Companies like LG & Planar would have been a great choice for making the NCC 1701’s Viewscreen as vibrant & realistic as possible! (lg.com & planar.com)

Halodeck: This was the staging environment in the “Next Generation” series, in which participants could engage with whatever environment they could imagine. Present-day versions…Virtual Reality goggles, headsets, & helmets – which allow one to escape to virtually anywhere one’s heart desires. VR is the ultimate “destination” in the world of immersive entertainment & experiences.

Communicator:  Used as a hand-held voice communication device, this must-have gear could also be used as an emergency signaling beacon. In the real world, Nextel introduced its breakthrough nationwide “Direct Connect” technology in the late 1990s. Just as the Communicators used by Star Trek’s crew back in the day, this small appliance allowed for immediate one-to-one connectivity with the Nextel party on the other end. Nextel’s “communicators” seized to exist after 2010, but more recently, Motorola has introduced its version of a “push-to-talk” gadget, called the Wave TLK 100. (motorola.com)

Personal Communicator Pin:  Worn directly on one’s uniform – leaving both hands free to do the daily work of a Starfleet Officer – this smaller version of the aforementioned communicator was used by the crew of NCC 1701-D in the “Next Generation” series. The Orion company offers the “Onyx” – the contemporary real-life version of this particularly swell communication utensil, which also clips-on to clothing, & is activated by the simple push of a button. A popular device among first responders, hospital staff, & other workers who need the use of both hands while on the job – this network gear syncs with Blue Tooth LE 4.0+ enabled smart phones, & is a real a game-changer! (orionlabs.io)

Universal Translator:  Simply put, this device could translate any spoken-word into any language used in the Universe – be it Human or Klingon. Now we can do that anywhere & at any time – on any smartphone, computer, tablet, or smart home device.

Vocal Computer Commands:  This is exactly what it sounds like – the Star Trek crew was able to just speak commands into computers, & voila…information found! Sound familiar? Here in 2019, we have our trusty A.I. smartphone assistants like Apple’s Siri, & our home-based, live-in “reference librarians” like the Amazon Echo & Alexa, & the Google Home smart devices. No more bulky encyclopedias, phone books, printed maps, dictionaries, or cookbooks needed!

Medical Tricorder:   A hand-held scanner that was used to quickly gather data on a patient, and instantly deliver a diagnosis. Although we don’t yet have anything quite as portable as a Tricorder, today’s CAT Scans & MRIs come pretty darned close as far as medical scanners go. There are even smart phone apps which aid in the detection of various health-related data. An example of this is the use of smartphones to pass-over Continuous Glucose Monitors worn by people with Type 1 Diabetes, to get accurate blood sugar readings (rather than having to prick a finger for blood samples).

Phaser:  Available in a variety of sizes, Phasers had a multitude of uses…zappers, heaters, slicers, etc.  Although we don’t know the actual tech used in those Phasers, we do have fiber-optic cable, & with it, we can send huge amounts of data using light. We can’t say whether or not this technology will someday be applied to make “Phasers,” but if using light to send exponentially more data doesn’t sound like something out of Star trek – we can’t imagine what does!

Of course, not every gizmo from the Star Trek franchise has come to be…YET! Wish-list items like Hypospray, Tractor Beams, Warp Drive, Food Replicators, & of course – Teleporters, are definitely on the drawing boards of many a scientist/inventor. And while some of these thingamabobs are getting closer to reality than others, we’re not quite there.

Psssst – here’s a little-known secret: CAPTUS SYSTEMS is already on deck with plans to design & build the AV for the very first Starfleet Starship! Doesn’t YOUR “enterprise” deserve the very best in AV Integration? Give us a call or shoot us an e-mail:  212-400-1616 or hello@captussystems.com, & we’ll transport one of our crew members directly to you, to tell you about the most modern collaboration frontiers that we can travel to together!